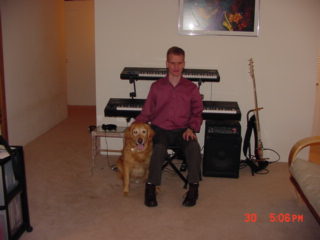 This page contains music I have played, some of which is original.

My History with Music

I began playing piano around 1981, at the age of four years old, after showing interest in the different sounds my parent’s baby grand piano made. I had an incredible piano teacher, Gail Smith, who made it possible for me to feed my love and interest in music! I always improvised classical songs, and Gail had to get me back on track with the song as-written.

In 1990 I played piano in eighth grade orchestra, which was my gateway into jazz and funk and even a little country - this was so-long playing classical music for me.

In 1991 my parents purchased me a Korg M1 keyboard, and I had a great time playing in high school jazz band and starting a DJ business with my brother. The DJ business wouldn’t have been possible without the encouragement, transportation, and financial support of mom and dad, and help and love of my brother Steve. I used a built-in sequencer on the M1 keyboard to create multi-track (piano / bass / drums / …) music, but the length of those songs were limited by the keyboards internal memory.

In 2002 I purchased a Roland XV-88 synthesizer with SRX-01 (dynamic drums) and SRX-02 (concert piano) expansion boards, which were a big improvement to my available sounds. I use computer MIDI sequencing software to record multiple tracks from the Roland XV-88. I started out using the Power Tracks sequencer , then switched to the Quick Windows Sequencer (QWS) in 2006 thanks to Andre Louis.

Around 2012 I wasn’t creating music as often, and I sold my gear in 2016 when we began traveling the US and living as nomads. We paused our nomad life in September 2019 to address Michelle developing a spontaneous CSF leak, shortly after which the COVID-19 pandemic began. Feeling a renewed interest in music and knowing we would be staying put for a while, I purchased a Komplete Kontrol S61 MK2 keyboard and some software instruments to make music again.

A friend asked whether I could play any Billy Joel, which reminded me that I’ve always liked Billy Joel’s song, New York State of Mind. I hope you enjoy my rendition.

The electric piano plays most of the melody, and attempts to match the notes and syllables of how the song is sung - this varies a bit over the years it was performed,, and nothing is going to match Billy’s expression (especially in later years of live performance).

Transitioning into the solo, is the electric piano playing a cord progression along with cymbals. This is inspired by the start of the verse from James Taylor’s Shed a Little Light which is accompanied by his lyrics: «There is a feeling like a clenching of a fist, there is a hunger at the center of the chest.» Those cords, James’ lyrics, and Carlos Vega playing cymbals in a powerful yet subtle way, is a great combination. I heard a cover of that song the other day, and the cord progression was stuck in my head - so something like it makes a cameo into this song.

The previously mentioned solo, has a shuffle (triplet and ghost-notes) beat, and the bass and electric piano stretch their legs.

We paused our nomad life in September 2019 to address Michelle developing a spontaneous CSF leak, shortly after which the COVID-19 pandemic began. Feeling a renewed interest in music and knowing we would be staying put for a while, I purchased a Komplete Kontrol S61 MK2 keyboard and some software instruments to make some music!

These songs are the first I’ve created with this new gear. I sent a CD as a surprise to my grandmother who is in her late 90s, sequestering herself against COVID-19, and is healing from an unrelated issue - I hope this music helps bring some joy to her days.

This is a mostly solo piano version of Georgia On My Mind joined by an electric piano for a little break-out groove at the end.

Jumpstart This is a soulful, light groove with piano, guitar, electric piano, and a bit of funky bass in the middle.

I wanted to try my hand at a funky tune with Berrie Saxophone, and Funk With Berrie was born. It’s a little funk in G, with some Berrie Sax backgrounds. The Berrie timing is a little off, though.

Nothing like some good ol’ piano and organ blues in C - I love me some Hamond organ vibrato, and tried to get what I could out of the Roland XV-88 organ patches.

After the success, fun, and appreciation of the previous CD, I created another one which I also gave to friends and family, and posted online. Get it for yourself at the Christmas 2003 CD page.

I decided to make a few songs that could be
played as introduction to a radio show, or podcast. Check out the intros here.

In 2002 I wanted to do more with music, and created a CD which I gave to friends and family for Christmas. I also put the songs online, and got quite an unexpected number of appreciative emails from people who discovered them! Check out the Ivan’s Jazzy Christmas 2002 CD page.